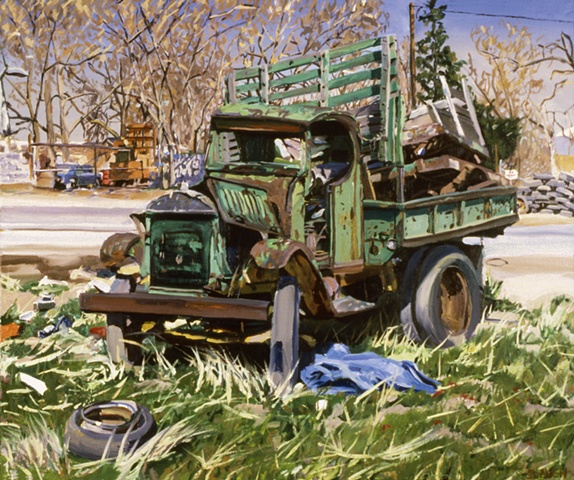 When I started painting this work there were old cars all around it, but then on the very first day the junkyard guys started hauling off vehicles one by one to be crushed, as I tried to frantically paint this old truck and its rapidly changing surroundings.

On day six the painting was still not completed, when at the end of the day an intense cold front blew in with enormous threatening clouds and I had to quickly get my things thrown back into my car just as the wind hit hard, then rain turning to sleet and finally snow began dumping everywhere. Not only was I not outfitted to paint in this kind of weather but the entire landscape was now completely altered as heavy snow covered up everything I was looking at.

At the time I was going through a phase where I had completely sworn off photographic reference, and being pretty puristic about completing it plein air or not at all I waited for the weather to turn back to something similar to what it had been when I started this early spring painting. However, for weeks it was cold, rain and snow, overcast with no shadows, and I had to face the real possibility that I would have to scrap the painting entirely as this vehicle was the last one in the yard when I left, and I figured they had towed it off shortly after I left.

But, as luck would have it, when the cold spell finally passed and I was at last able to go back out there to see what (if anything) I could salvage of this scene, the old 1919 International was still sitting out there in the field all by itself. I had one more full beautiful spring day to wrap up all the loose ends and then, as I was cleaning up and packing my paints and other supplies into my car, the guys came out in a tow truck, hooked it up and hauled it off.